The WGC Accenture Matchplay kicks off today at The Ritz-Carlton Golf Club, Dove Mountain, Marana, Arizona. It pits the top 64 players based on the official golf rankings and is head to head golf, mano v mano until we get a winner on Sunday evening. Last year Englishman Luke Donald was the victor 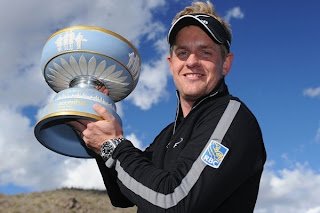 There are some intriguing first round matches. Will Tiger Woods be able to continue to show signs of a return to form? He's up against the long hitting Gonzalo Fdez-Castano and I guess the greatest thing in Wooods' favour is par golf isn't a necessity this week. As long as you get it in the hole in one less than your opponent, scores are largely irrelevant and I think that will suit the former world number one. I can see him winning his first round game to set up a second round clash with the winner of the Nick Watney v Darren Clarke game.

What about the reigning champion? Well Luke Donald has a very tough clash in arguably the tie of the round against Ernie Els. Both have swings and tempo to die for and Els is a tough player. Granted he's not been playing his best golf but in an eighteen hole sprint, he's more than capable of beating Donald. Personally I think Luke will edge this one and should see off the winner of the Dufner v Hansen clash in the next round.

What about Lee Westwood? A gritty player, he's another who showed some return to form in the desert recently and perhaps should have won last time out or at least forced a play-off but a poor chip at the last cost him. I fancy the Englishman to win his first round clash and should he get through his second round encounter would come face to face with Tiger.

Ian Poulter has won one of these matchplay events before and so knows how to get the job done. Fresh from the birth of his son Joshua James he should be hungry and should do enough to be Sang-Moon Bae from South Korea. However I don't think he's played enough golf recently to be good enough to go all the way.

With such a big field, picking a winner is tough. I like the draw that McIlroy has and think he will make the last eight with ease. I'm not sure he's quite on song to win it. As a wild card, Garcia looks to be enjoying his golf again and has loads of Ryder Cup experience to draw on but my two picks are Hunter Mahan and Bubba Watson. Both hit it a mile and in the rarefied desert air that is going to be a big plus. Both are playing well and both have enough matchplay experience to grind a result out. It's perhaps ironic that with a field so bereft of Americans (only 17 in a field of 64) I've picked two as my choice to win.

Whoever comes out on top, it'll be compulsive viewing. I love matchplay, although as a player I tend to lack the killer instinct to kill a match off. I might get two or three holes in front with five or six left to play and then lose one. Not to panic, I've still got plenty in the bank. Lose another and suddenly the lead is down to one with a few holes left and momentum has left me. I need to get my nose in front and get a taste for blood. Plenty of time to be nice once we've shaken hands. Too many games have slipped through my fingers that were there for the winning.

I use to love watching the World Matchplay at Wentworth which was a bit of a curtain closer for the season and played late September or early October. Perhaps at its peak in the 80's I use to go along regularly and marvel at Seve, Faldo, Woosnam etc. Top players at their peak. Seve was my favourite and matchplay was his kind of game. He had that invincible aura and even when his game was off and he struggled to keep it on the Wentworth Estate, he'd find a way to make par from impossible positions. Impossible to play against and fascinating to watch.

I don't think we'll see anything quite like Seve this week (or ever again) but it's going to be brilliant viewing. I've hidden the remote from the wife, fluffed the cushions in my favourite chair and I'm waiting with eager anticipation for the coverage to start. Who will be last man standing come Sunday night?
at February 22, 2012