I've been playing golf on and off for the last thirty five years and there are only two things I'm sure about. It's a game that can never be tamed and you usually play the best golf when you least expect it. The latter is certainly true if my performance in the monthly stableford on Saturday is anything to go by.

I haven't been playing well at all and to be honest I still think my win at St Pierre was in part down to luck. I really have been all over the place and have no real idea where my next shot is going or how I'm going to swing the club. I played nine holes on Friday night and managed to lose four balls. My technique was shot and my confidence through the floor. Even warming up before my round wasn't any better and I was fearing the worse. To make matters worse I was partnered with two very good golfers in Dave Grove, an ex-captain off a superb 6 handicap and long time member Peter Martin who had recently enjoyed a good spell to cut his handicap down to 10.

I had no idea what to expect and my thinned tee shot some 40 yards short of the 1st green didn't bode well. A pitch and three putts later and a shot had already gone. I knew this round was going to be strange. It had that feeling. On the 2nd I hit a good tee shot and second and left 82 yards in. It wasn't quite a full 52 degree wedge but I hit it way too clean. However it bounced and spun and finished no more than six feet away. Peter managed to get even closer and converted too. I hit the putt too hard but it grabbed the left edge and dropped for a birdie to repair the damage on the first. I parred the third and was suddenly two under my handicap.

As if it reiterate the randomness of my game I hit the fairway on the 4th and then hit a stone cold shank with my sand wedge, straight right and narrowly missing the bunkers but giving one of the shots back. I made nett par on the 5th and so standing on the 6th tee I was still ahead of the game and so far the shank had been the sum of my fears. I had a hybrid in my hand and was reasonably confident. With my handicap up to 14 I get a shot so hitting the green wasn't imperative. What was important was avoiding the out of bounds left and right. The swing was rank and it went straight right. Not a shank but a slice with a bit of right to left on it for good measure. I teed up my third shot and still didn't put a great swing on it but it found the green. I thought two putts for a five would still keep the score ticking over especially as I was twelve feet away. Imagine my surprise when I holed out for a four (nett par) or a birdie with my second ball. If that was good then Peter's proper birdie courtesy of a holed bunker shot was even better.

I did give it all back on the 7th when I lost a ball and didn't score and I failed to score on the easiest hole on the course, the 8th after finding sand off the tee and somehow managing to double hit the ball with my bunker shot. From a position of strength I was now well down on my handicap although a good up and down from short of the 9th for par helped and saw me out in 16 points.

To be honest it was better than I expected but I didn't feel as though I had any idea what was going on. It was almost trance like and I wasn't thinking about any shot, had any swing thoughts in my head or had any idea of the outcome. Check the yardage, pick a club and hit it. 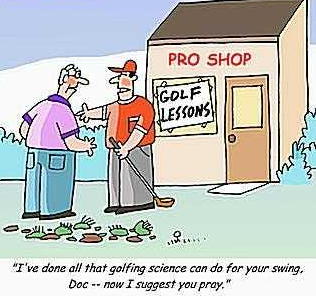 The back nine scrambled my brain even further. I hit a good tee shot on the 10th, probably the first shot I actually felt in control of but then managed to hit the 98 yard approach fat. It ended up short and right of the green. As regular blog readers will know, of all the facets of the game, chipping is my weakest point. It hadn't been going well in recent weeks and there was no way of knowing if it would be fat, thin or half decent. As it happened my 7 iron chip and run came off the face perfectly and was dead weight, tracking the hole all the way before dropping for a birdie and four points. That repaired all the damage with one shot. I parred the 178 yard 11th too which again put me under handicap. I hit another good tee shot at the 12th and missed the green left. With my holed chip fresh in my mind what could go wrong? Two duffed chips later we're walking off with a six (one point) courtesy of a very good 8 foot putt.

Things didn't improve on the next. I suddenly hit a wild tee shot with my hybrid at the 186 yarder into thick rough. Although I got it out it ran through the green and I couldn't get up and down so failed to trouble the scorer. At this point I'm back to being two behind my handicap and to be honest the only thought in my head was to keep the score going and try and make the buffer zone so the handicap didn't go up.

Suddenly my game jumped into life. Well sort of. The putter did anyway. Another good drive at the 14th was negated by a huge hook left of the green. Again, I hit the chip heavy and assumed it would be short but somehow it had managed to roll down and was only 10 feet away. I drained the putt for a very unlikely par. On the short par 5 15th I was on the green in regulation although a good 20 feet away and looking for a solid two putt par. Again the ball had other ideas and fell in perfect speed for a birdie.


﻿
The 16th is a tough drive with out of bounds all down the left. I aimed well right and had already accepted that a five (nett par) would be a safe and sensible play. Suddenly my whole thought process had changed. I still had no idea what was going on technique wise but lay my trust in the golfing gods as it seemed they had their finger on the pulse. The drive was further right than I wanted but my second ended up some thirty yards short of the green. If I could put a decent chip on it this time the five looked safe. I hit another 7 iron chip and run to about 7 feet. Surely I couldn't. That would be too rude. I did! In it popped for another par and another three points. When I hit the green at the 228 yard 17th there was something very weird in the air. The golfing planets were aligning for me. Dodgy swing, trance like and with no confidence I was on fire. So much so that I left my first putt some 6 feet short. Suddenly I faced my first clutch putt of the round. It dropped as I almost knew it would.


Standing on the 18th I'd already done the maths. I could afford to have a horror and not score and I'd still shoot level with my handicap. However, were I to get a par and another three points that really would be a competitive total. There was a wait on the tee while those playing the 15th teed off. Not what I needed as I just wanted to get on with it. In the end the drive was a little too far left and brought the big oaks on that side of the hole into play for the second but it was safe. I hit a good if not great second and now it was decision time. I had 128 yards into the wind. Usually that would be an eight iron but with the water in play on the right I wanted to be long and dry. I took the seven and hit it well. It was the best shot of the day and so had a hint of draw which took it off the green to the left. Off a bare lie I was never going to risk a chip and so took the cowards option and putted it down. I stuck it stone dead for an easy tap in.

I couldn't believe it. I'd just played the back nine in two over par gross and in there were two double bogies for good measure. Definitely my finest nine holes and even more satisfying as I had no idea it was coming and no idea how I managed it. Thirty nine points was good enough to win the division although my 23 point second half score would have won on countback had anyone had the temerity to match my score. What can I say? A handicap drop to 12.6 (13 in real money) and entry into the Masters. No not that one, but the Ascot Masters which is invite only to competition winners over the last twelve months. Happy days.

So what can we take away from the day. Well, I'll never understand golf. How can you go from zero to hero like I did Friday night to Saturday morning. How can you win, not knowing what you are doing with the swing or where it will go. At the end of it all, these questions can wait. Two wins in August. Sublime. See my faithful followers, I said the fightback had started. We're back on the road again.
at August 22, 2011