I spent yesterday afternoon at at golf clinic hosted by Ryder Cup captain Colin Montgomery which included a Q&A session as well. He started of by explaining how he sets up to play a shot, including the techniques he uses for moving and shaping a shot, his thought process and pre-shot routine. All pretty standard stuff at these sort of events. 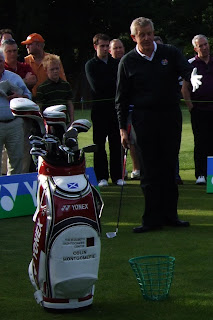 However, it was the Ryder Cup that everyone was interested in and in particular the reason Paul Casey wasn't picked and Harrington was. The first thing of interest was that Monty expects Lee Westwood to be able to play all five rounds at the event. Given that Westwood is not due to start hitting balls following rehab from his injury until Monday it only gives him two weeks to find some decent form and prove his fitness. If Westwood doesn't make it, Casey will be drafted in. The reason Casey wasn't picked initially came down to one discussion between Montgomerie and his vice-captains over the winning putt and who they would want to be standing over a four footer to win the cup. Given his three major titles and reputation for being one of the best pressure putters around it was a deciding factor. 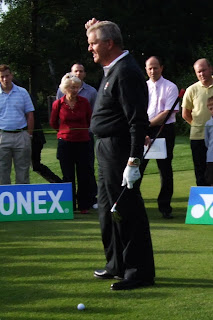 Monty also revealed that he thought Corey Pavin would pick Tiger Woods and probably the next three in the order of merit to make up his wildcard picks. He also said that he expects it to be a very tough match and that home advantage may be the deciding factor.

When pressed on his own future he said that he really wants to get back to playing on tour next season without any distractions. I asked if he had any plans to join the senior tour in three years time. He said no, definitely not as he has had enough of the hassle of travelling. He is exempt until 2015 when he'll be 52 and reckons he'll call it a day when he reaches that age if not before.

Also, there is a protocol that if any member of either side is injured or ill and can't play the singles tie on Sunday that the captain has a name in a sealed envelope with the player he wishes to pull out from his own side. Monty revealed that he won't even be telling his vice-captain's who he plans to pick and has said he wants the envelope returned to him unopened if it isn't required so he can personally destroy it so that the name of the golfer he in essence doesn't think can win his match is never revealed.

So, all in all a very revealing day. It's certainly whetted my appetite for the Ryder Cup even more and I can't wait for it to start. I'm praying Westwood will make it through as I can see him being a lynchpin for the team although I also think if there was any doubts, Monty would know by now. 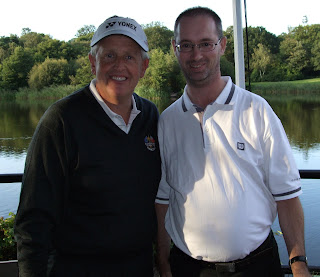