The Secret Is Out

Regular readers will know that I've been teasing you about a big day at The Grove in association with Golf Monthly magazine. Well the secret is out after my big day yesterday. I was selected to attend a panel made up of members of the Golf Monthly Forum (http://forums.golf-monthly.co.uk/) to test a new e-book called "New Golf Thinking" by John O'Keeffe and Denis Pugh. The latter will be known to many as a coach to a number of top European players and is a regular studio guest on Sky Sport's golf coverage.

The day itself was hosted by John O'Keeffe. A former top global manager for Proctor and Gamble, John was a member of the Great Britain hockey squad and in the Olympic programme for two years before the Munich games. He retired from hockey at twenty one and went on to become a world expert in developing techniques to achieve high personal performance in the workplace (see www.businessbeyondthebox.com). As a single figure golfer in his own right he's collaborated with Denis Pugh to write New Golf Thinking which gives the reader seven breakthrough techniques to lower scores. 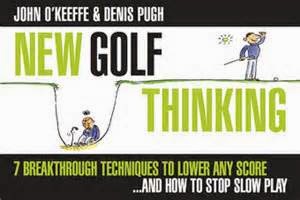 Now I can hear the groans already. Another mumbo jumbo psychology book in a market place already flooded with them from the likes of Bob Rotella and many others. This is where the Golf Monthly forum panel comes in. We were selected to meet with John, spend a few hours listening to him explaining some of the techniques in the book and then take the tools we'd learnt onto the prestigious course at The Grove. Designed by Kyle Phillips and having played host to the 2006 American Express World Golf Championship won by Tiger Woods, we would be tackling it off the daunting medal tees measuring 6766 yards.

It's well known that despite advances in tuition and equipment technology, average scores and club handicaps are no lower. The two traditional ways to improve aren't working. Technical teaching on the range is not enough in itself to significantly lower scores on the course. Looking to improve through sports psychology material to solve golf's non-technical problems has been too complicated and impractical for most. What John and Denis have developed are seven simple thinking techniques that are used successfully on problems outside of golf and adapted them to the game.

Like many I've dabbled in some of these books, particularly the Rotella series and used the advice contained in them for a while. Sooner or later I drift away from the teachings, particularly when things go wrong. As many have commented before, part of my trouble has been a head brimming with thoughts, technical and mental. For several years, I've actually been trying to play with an empty head and basically pick a target, trust the work on the range to hone my swing, and hit the thing. I was worried that this may be a step back into those dark days with too much going on in my head but was prepared to give it a go.

As part of the selection process I had to submit a synopsis to Mike Harris, editor of Golf Monthly, on some of the problems in my game including 2-3 non-technical problems causing me not to score as well as I want and what frustrates me about how I play. Where to start? Actually the answers were simple. I hit it well on the range and in lessons but can't take range form out onto the course. The frustration comes from a short game that has held me back and the ability to play well for many holes before throwing in a killer score to ruin a potentially good round. It seemed to strike a chord and here I was in a meeting room in The Grove along with seven other nervous forum members.

The morning was full on although John's teaching method is very easy going. Each of us had our own individual issues and it was impossible to condense all seven of the techniques into one morning session. The first task was to complete a "thinking" handicap based on seven areas (bounce back, rise to the occasion, can do, self start, freshen up, results driven and clear headed). For each of us this was significantly over our playing handicap showing we all had areas to work on.

The book is really easy to understand and will appeal to golfers of all abilities. I'm not going to go into any great detail here as you really need to download it for yourself and work through it. The great thing is, you can choose a section that specifically applies to the issues you have and start with these before working through the rest of the book.

After lunch it was time to hit the course and put the theoretical into practice. As it wasn't a competitive round, we were given a shot performance sheet to complete after each shot. This is designed to get the golfer to focus on aiming for the very best shot, a "career shot" on every shot taken. While a career shot on every stroke is impossible, there is a "score improver", "score maintainer" or a "score worsener". An iron shot to within three feet of the hole would be an improver. A mis-hit second shot on a par five that still goes 150 yards down the fairway would be a maintainer and a slice into the water would be a score worsener. With time and practice this will get the golfer to focus solely on the shot at hand and playing one shot at a time.

The opener at The Grove is a gentle right to left dog leg measuring 340 yards off the medal tees. I hit an opening three wood onto the fairway and then popped a six iron to six feet. There might just be something in this New Golf Thinking. I didn't make the birdie but the mood was set. I played some good golf on what is a long and tricky course. There were a few bad shots. Off a handicap of 12 these are inevitable but none of these were too destructive and I was able to recover the ball into a scoring position. It was difficult and a little time consuming filling in the sheet after every shot, but the course was empty, real millionaire golf, and so we weren't holding any groups up behind.

In the end, I scored thirty two points, seventeen out and fifteen coming home. To be honest by the last three holes I was mentally and physically exhausted and made some tired swings. However as a whole I was more than happy with the way I hit the ball and more importantly the decision making and thought processes I adopted.

As part of deal, I will be giving regular updates which will appear in forthcoming Golf Monthly editions so I'm afraid readers will be seeing and hearing a lot more about New Thinking. The plan is to see how I progress with the intent being that these new skills will assist me to realise my ambition to reach single figures.

It was a fantastic day and I must thank Golf Monthly for putting the event on in the first place, John O'Keeffe for his time and good humour giving us the initial tools to start the process and to the Grove for their great service and providing a golf course in fantastic condition.

This is a shift of emphasis although it won't stop the lessons and practice. However, the change of direction is a new way of approaching my golf. It isn't an overnight process, hence the ongoing updates in the magazine, but over time I am hoping I can find a way to play golf, especially competitive golf, with a mind focused on the job in hand. If and when things go wrong, I should be able to use the techniques in the book to keep the mind from thinking destructive thoughts and keep myself mentally on track. Of course you still have to make a good swing but with the work I've put in on improving my technique, this side of things is beginning to move forward already, including that nemesis the short game.

The book is available on Kindle, Amazon and as an I book and is definitely worth investing in. It is simple in its approach but the content will resonate with many golfers without it being too complicated. It really is new thinking and breaks down the barriers we've all put up around our own games. Of course, I'll be posting about progress, on here and in Golf Monthly and so you can see how it helps (or not) my game. As for now, initial signs from my round yesterday are encouraging and with the competitive part of the season beginning in earnest it'll be interesting to see how I get on.

Many will see it as a fad, mumbo jumbo or something silly and unwarranted for a mid handicap club golfer but those open minded enough to download the book themselves will see how the processes apply not only to golf but to life in general. I'm off to do some more reading and look at the areas that I need to work on. Even if I score badly in the monthly stableford on Saturday it won't be through bad thinking. Homer out.
at April 30, 2014