Back To Earth (With A Resounding Thump)

Not a great day on the course today. The swing was all over the shop, the mind wasn't on the job in hand and I couldn't get anything going or find any sort of spark. Fortunately it was only the usual Saturday morning roll up and so there was no damage done to my club handicap, although the roll up guys cut me two shots for winning last week so I was playing off 11 today. At the end of the day two shots made no difference and it was woeful, especially the front nine.

It had all started so well with a chip and a fifteen foot putt for par at the first. Then the rot started. I hit a drive out of bounds on the second. A truly woeful swing. I steadied the ship at three and four but missed the green miles right from 147 yards with my approach at the fifth. I duffed the recovery into a bunker, and then forgot the "splash" part of a bunker shot and hit it way too clean and over the green into deep rubbish and failed to score. I hit another poor, poor tee shot on the 6th (did I ever mention my loathing for that hole?) for a lost ball and no score. I did manage to redeem myself out of sand when my tee shot at the eighth missed the green right and I escaped to four feet and holed out. A terrible three putt at the ninth cost me (it was a hole I don't get a shot on off my new roll up handicap) and all in all it added up to a measly 11 points.

Things didn't improve down the tenth when the drive went left into long rough and I could only hack it forward about twenty yards and then missed the green with my next. Even when I hit a good shot as I did on the par 3 eleventh, with a 4 iron finding the heart of the putting surface, I contrived to three putt from no more than twenty feet. What a muppet.

I made a good up and down at the next which helped and found the front of the green at the par 3 twelfth and this time the putter behaved. It was my driver that was mis-firing. I hit one way right off the 14th tee and was lucky to find it and luckier still to get a shot. The sweet spot went missing off the fifteenth tee too. However it was the missed green from 131 yards with just and 8 iron in my hand and a duffed chip that were really to blame for not scoring on the hole. By the time I reached the 17th I was running on empty. My mind wasn't on it (had it ever been "on"?) and the swing was all over the show. Ironically I found the green at the long 218 yard par 3. Guess what followed? Correct answer. Another three putt. I managed an acceptable 6 (nett par) at the last for a dismal 25 points. No cash for Homer this week and it was back to shelling out.

The good news is I think I know what the fault is and so it's off to the range tomorrow to work on it. If it doesn't come back I've a lesson booked for Tuesday which was going to be looking at the mental side (shot preparation, swing thoughts etc) but can easily be switched to a swing assessment. Then it's a case of working it through before going off to play Windlesham on Friday http://www.windleshamgolf.com/

It's my birthday on Thursday (45 years young) and so I went out and treated myself (ok I used some birthday money) and bought a new carry bag. Being a bit of a Taylormade fan (brand whore) I went for their new R11 bag. 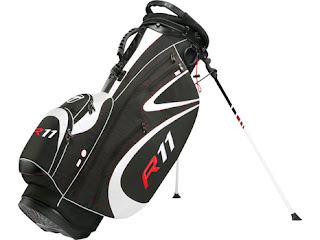 It looks great, is nice and light and has plenty of pocket space. The guys in the pro shop at Royal Ascot did me a deal on it and priced matched the best internet price I could find so everyone's a winner. I'll be trying it out for the first time at Windlesham on Friday so I need to find a decent golf swing to do it justice. At least the retail therapy numbed the pain of today's round. Hopefully I'll get it cracked again tomorrow. I'm also off to look for a new 3 hybrid in the morning as the current Taylormade Burner has been mis-firing for ages. It sits closed and I can't stop hooking it so I'm off to find one with a more neutral set up. I love testing new clubs so it could be a long morning for the shop assistant! I'll be sure to let you know if I find something I like. I love this birthday lark. The Queen's got it right and I think I need two birthdays as well if only to keep up with my spending on golf gear.
at June 11, 2011