Fed up, Frustrated, Foolish and a few more choice words beginning with the letter F pretty much sum up my feelings after this weekend. It was the Stone Cup at Royal Ascot this weekend. It is one of the club's majors and is a stableford format where you can play any two of the three days of the long bank holiday weekend.

I went out on Saturday and played with my normal partner Mike Stannard, Anthony "Kerching" Ayres and Colin "Wyatt Earp" Osborn. Things started smoothly enough, in fact better than that. I hit the first green with consummate ease for a rare opening par and although I dropped a shot at the next, I got that one back with a rare birdie at the 5th. Clearly the real Homer had been switched with a doppelganger. This mysterious impostor even hit the 6th green with a majestic four iron. Regular blog followers may have seen my recent post on that particular hole (if not check it out to see what I mean) and the fact that it's my nemesis. Not today. The real Homer did make a guest appearance at the short par three eighth where he missed the green left thinking the gusty wind would bring the ball back and then making a nonsense of his chip shot back. However by the time he walked off the ninth hole, Flair was another F word that could have been used. 19 points and one under my handicap.

A poor hole on the tenth negated these early inroads but another rare par at the hardest hole on the course, the twelfth, had the round back on track. Things were going well and Fun Homer was out to play. All was well in in the world. I made a great par on the 14th hitting a wondrous 4 iron between two trees and onto the green from the right hand rough and two putting with ease. My drive on 15 found the first cut of rough and I was in great shape. One under my handicap, playing well and an easy second shot to come.

What F word can I use to describe what happened next. Frightening, Fragile or Foul. Take your pick. I hooked my second shot left and despite the best efforts of the group it was a lost ball. No points and back to one behind my handicap. Not a problem. You can't win the Stone Cup in the first round but you can definitely lose it. Now I'm no psychologist, but I'm pretty certain when I stood on the 16th tee I wasn't dwelling on the misfortune of the previous hole. I knew where I wanted to hit it and aimed for that point. The execution however was poor and it hooked left and out of bounds. My second ball stayed in play but I never threatened to trouble the scorers.

Fixated or Focused. Hard to tell really standing on the 17th. I knew I needed no worse than a four (nett par) to get this wagon back on the road. However the swing had Fled and the real Homer had entered the building. Another huge hook left sailed into the trees out of bounds and when the reload followed suit Homer was in Edvard Munch's world - The Scream. Alone and Frightened. 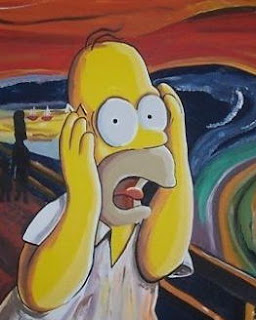 In the end I did manage two points down the last to creep home in 31 points.

Flipping heck. A round that had promised much and again Failed to deliver. It's an old story of good ball striking being undone by needless and unforced errors. Oh well, I'd just have to put in a stellar second round to mount a challenge. Famous last words or not......?
at May 30, 2011