In the end it wasn't to be, and the Jubilee Cup won't be coming home to Homer. Subject to ratification, it looks like the Sundance Kid  (Matt Davis) has ridden in to town again and saddled up with Wyatt Earp (Colin Osborn) to take the spoils. Playing off three quarter handicaps (meaning Matt was off 14 and Colin was off 9) and given the wind was as strong and gusty as it had been all weekend, their 44 point total was mightily impressive.

With only a few groups left to come in by the time I left, it will take something very special for Matt and Colin to be beaten. They recently one the Winter League competition too and so they are forming THE pairing to beat. 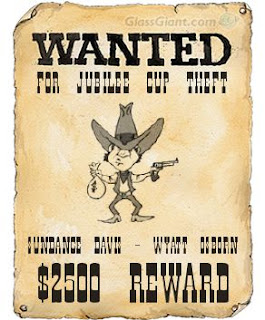 I was playing with Mike Stannard, a fellow Fulham fan and a man in a rich vein of form having recently enjoyed a handicap cut to 11. My game was showing signs of life and I was cautiously optimistic of a reasonable showing. The first at Royal Ascot is tough. If you want to know how tough check out the "Hackers Guide to Royal Ascot - Hole 1" for all the pitfalls. Suffice to say at 229 yard and with out of bounds, bunkers and a pond to contend with it, is not an appetising first shot. Did I mention the wind? It was blowing straight into our faces and with Mike not getting a shot off the 3/4 handicap format the pressure was on me to make sure I used mine wisely. Lo, I only went and drove the green. That doesn't happen often even in calm conditions. I even made par and the boys were off and running.

When I got up and down for a par from a bunker on the second, chipped and putted for a par at the third we were already three points up on our handicap. I was level par. It must be a dream. Reality kicked in on the relatively easy 4th and we both dropped a shot. Schoolboy error in this format. However I got that straight back at the 5th with a great pitch from left of the green and two solid putts for par. I even hit the heart of the green at my nemesis hole the 6th. I was only one over par. Mike came to the party on the last three holes of the front nine and we had gone out in a whopping 22 points. Game on.

I carried it on on the 10th with another par although I didn't get a shot. Damn this 3/4 handicap lark. And then the wheels came off. I lost my ball after the tee shot on the par 3 11th missed left. It didn't look in any danger but could we find it? Not a sniff. Mike had a horror show in the bunker and we didn't score a point. I made a brave ten footer for a nett par on the next to keep some momentum and found the heart of the green on the 13th for another par. Mike stepped in at the 14th for another two points. On the 15th he smoked a drive and only had an iron into the par 5. A birdie or better and we were back in it. I had hooked my drive and was faced with a shot from the 14th fairway between two trees.

Mike's approach was well struck but missed the target pin high. I was going to play it conservatively but decided he'd be good for a par at worse and so gambled on going for it. Big mistake. A rubbish swing saw my 4 iron slice to the right, hit one of the two trees and disappear. Another lost ball but Mike made par so it was worth the risk. I got another solid two points at the next and on the 17th I was short of the green off the tee. I hit a decent chip, given the pressure, to within two feet. Unfortunately the putting bubble burst and I missed it for another dropped point. I hooked my 3 wood off the last tee trying too hard to make a par for three points which we desperately needed to have any realistic chance. In the end I had to lay up short of the green, and although Mike made a par five, he didn't get a shot so it was another two points. I had a shot from 15 feet to save par and clinch the three points but in the end it missed right.

In the end, 37 points was a fair defence but after such a blistering start, it was a little bit of a whimper on the back nine. However I am delighted at the way I played. After so many false dawns, so many "it is coming" comments and so much hard work it was great to get the reward scoring wise for way I hit it. I've got a lesson on Wednesday evening and so we'll attack the short game again. After that it is the monthly stableford on Saturday and for the first time in a while I actually feel confident. It'll probably be the kiss of death now but I feel I've turned a corner. Bring it on.
at May 02, 2011