As golfers we are constantly looking at the weather. Will it rain? Is it going to be windy? For the most part we’re a fairly robust and hardy bunch and will usually venture out in most conditions, especially if it’s a match or competition. Now I don’t know about you, but having said that, it’s one thing to already be on the course and playing and for the conditions to deteriorate, especially rain, but a totally different scenario knowing a few days in advance it’s going to be pouring before you even get to the club and there’s no sign of it stopping until long after you’ve finished. That takes a different mind-set totally.

I think you can guess what’s coming. We were due to play a friendly club match against Tylney Park at my home club, Royal Ascot. It was the return leg following the first game at Tylney Park at which Royal Ascot took away a 4-2 lead. Sadly, I was one of the two that lost although in my defence my partner on the day had one of those rounds we all know so well and for the most part struggled. That said, he did come in in the early stages and definitely kept us in it or it could all have ended far earlier and in a greater deficit. The weather forecast had said heavy rain throughout the day for a few days before. For once the forecasters were spot on. 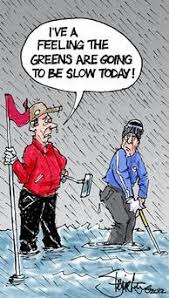 Having woken to a leaden sky, the rain soon came and it was almost biblical by the time we convened for brunch. We were introduced to our opposition, Chris Mitchell off 21 and John Weatherley off 12 who had more than a passing to resemblance to the wrestling star of the 1970’s Jacky Pallo complete with trademark ponytail

It was with a heavy heart that I put the waterproofs on in the locker room knowing I wouldn’t be taking them off again until I returned at the end of the round. No point warming up and getting everything wet and the fact the putting green already had a puddle on it didn’t bode well. Things didn’t get better when my partner Harvey Woods and I made a farce of the opening hole to go one down immediately. We got it back and then lost another. I scrambled a half in a double bogey seven at the par five 5th having played three off the tee (a great name for a youtube channel, so go check it out here The Three Off The Tee Youtube Channel and PLEASE subscribe while you’re there).

Conditions were horrendous to put it mildly. From the outset every hole had standing water and many greens had puddles. Finding relief from standing water was becoming harder and harder and while scoring wasn’t great, it was a nip and tuck match and played in great spirits. It was a feeling of all in it together and all four of us simply laughed at the absurdity of what faced us, the rubbish we were playing and enjoying the good ones when they came along.

Having got it back to all square at the 7th Harvey made a great half at the eighth for a crucial half and we managed to get our noses in front one up after winning the 9th. I have to be honest I wasn’t relishing another two hours in those conditions. I had wet gloves on both hands and was wringing water out of both before playing each shot. I’d taken the precaution of wearing my waterproof socks (a great idea for Christmas) and these were working overtime but my feet were dry and warm.

As we headed towards the 10th across the car park I was so pleased to see both captains standing at the front door to the club waving us in. Match abandoned as a draw, all scores on the day null and void. I don’t think anyone in our group or across both teams were too distraught at that decision and with the course only going to hold more water a sensible move to protect it, especially the greens. As a result, it was decided the match score from the first game stood and so Royal Ascot got a narrow win.

I’d like to thank my playing partner Harvey, especially for keeping us in it and getting us in front, even in vain, and to both Tylney members Chris and John who were a joy to play with and I’d like the chance of a home and away rematch next year.

Sometimes as our captain Stuart Pearce said in the introductions to the proceedings you have to “man up” but even then, you have to be pragmatic and the decision to call it off was a wise one. It definitely takes a strong mind not to let conditions get the better of you and amongst the rain and the puddles there were some good shots from everyone in our group. There’s definitely a certain madness we golfers have to go out in such conditions to get our golfing fix and represent our clubs. Sometimes the weather may win the battle but as golfers we’ll win the war