Well after all that renewed enthusiasm and positivity my monthly stableford lasted four shots and could potentially be the last golf for a while. Having hit some balls in practise I stood on the first tee in steady rain confident that this was going to be a good day.

Even before impact on the opening tee shot there was a twinge of pain in my lower back on the right hand side and the body instinctively tried to pull out. The result was a horror skied shot straight right and out of bounds. I reloaded but the result was the same. As I couldn't score I walked the hole and stretched and flexed the back while by partners were holing out.

I managed to get a better contact on my drive down the second hole and without a reaction so thought perhaps it was just a wee twinge after all and that I could begin to repair the damage of the first hole. However, as soon as I made contact with my second shot, I had a frisson of pain running down the right side of my back, through the buttock and down my leg. 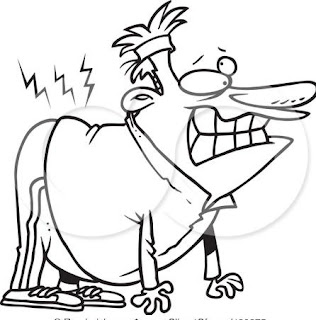 It took my breath away. I've had some injuries and illnesses over the years but never felt such an immediate amount of agony. I could barely stand and that was that. I wasn't prepared to or able to play further. One of the guys gallantly wandered down to retrieve the ball, we shook hands and I limped, hobbled and virtually crawled back to the clubhouse leaning heavily on my electric trolley for support.

I've been taking the anti-inflammatory tablets and have had regular ice on it. The garden peas in the fridge have taken a battering and may no longer be for for human consumption and I'm fighting hard to reduce the internal damage and prevent it from stiffening up. To be honest I'm in a fair degree of pain. If you've ever hurt your back at any time, it's one of those where no matter whether you stand or sit there is never a position that is comfy and pain free. I've been trying to move around to keep it loose but the pain is a constant nag like toothache.

Of course the biggest issue is when can I swing a golf club again. Probably not for a few days at the very least and maybe a lot longer which is a real downer. I tried to hit a chip shot to see if there was any chance of perhaps just working on the short game and that brought the same degree of hurt in the same area and so the answer is a definite no. I'm down to play the monthly medal next week and so we're have to make a decision at some point about whether to pull the plug on that.

I'm gutted. I was hitting it reasonably well in the warm up and really looking forward to playing with Ken Martin, the club's vice-captain for 2012 and with Steve Downey who is a regular in the Saturday roll up. I was also looking forward to testing the game out in a competitive environment, especially the rejuvenated short game. All of this goes right back on hold. Gutted doesn't begin to cover it. And do you know the cherry on the icing on the cake? I got docked another 0.1 on the handicap to go from 13.1 out to 13.2 for the sake of four shots.

I'm one grouchy bear at the moment. Approach with caution
at March 03, 2012